At last the Macquarie bank is being publicly questioned about it's methods. I have said for a long time it is ethically not a good look. Now the man who told the world about Enron has come out publicly and questioned Macquarie. Last night on the Telly here, 4 Corners [documentary show] looked at their take over of Thames water in the U.k. and their attempted take over of Qantas. I think it is a case of greed and very clever corporate lawyers. It is disgraceful that our government gave the go ahead for the failed Qantas bid. They are either blind or worse to the realities of Macquarie.

The state government is being asked to lay more train tracks. They were asked to do that 30 years ago. Now they have sold off the railway network they will have a much harder job to achieve this. I don't think the modern day economists have thought through their economic modeling very well.

The future fund set up from the funds raised from the 50% sale of Telstra and made really to pay the super annuation of retired public servants. [a dishonest joke] is now being questioned as to it's mandate being appropriate in a world of carbon trading and climate change.

We are certainly entering a new world on so many fronts. I reckon that soon it wont just be a carbon tax on airline tickets, it will be a case of show a need to travel by air and it will have to be legit for x number of flights per year. Has anyone considered alternative fuel to av gas for aeroplanes. Electric, Nuclear, Solar?????

A program on the idiot box the other day dealt with Crude Oil and was frightening in it's assessment of how long we have left for oil, and just how much we use of it every day. No wonder the Americans are fighting over in Iraq.


Any additional comments can be sent to mark_brickel@hotmail.com
Posted by Grump at 10:09 am No comments: 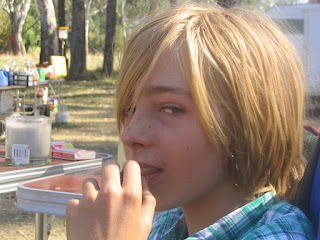 It's Jack's birthday tomorrow, he will be thirteen. So happy Birthday to Jack.
Woof

Any additional comments can be sent to mark_brickel@hotmail.com
Posted by Grump at 5:01 pm No comments:

The Brotherhood of St. Laurence is a charity that works with the poor of our community. Many years ago they helped a project I was involved in for kids. They were the first to see the benefits of the program we were running and gave seed money [when government wouldn't] to get us going.
Today I read in the paper their assessment and proposals for dealing with the chronic shortage of housing for low income people. I have added their link here . In times of large surpluses why are we giving very rich people tax relief, when they are already wealthy and ignoring an ongoing problem in housing. The price of houses is way too high and in part it is because of government policies and tax incentives.
Lets hope that if the Labor party win the next federal election we will see more public housing built.
Woof.


Any additional comments can be sent to mark_brickel@hotmail.com
Posted by Grump at 10:40 am No comments:

Firstly here is an article in todays Age newspaper written by Kenneth Davidson. Explaining the whys and wherefores on the Future fund that the federal government has set up. It is a multi-billion dollar lie.

Secondly I had a thought about the use of energy in our society. One of the best ways of conserving future [carbon based] energy supplies is to use less. And that is where I realise we have a problem. Not only have we been encouraged over the last 50 years to consume more. We now have privatised power supply companies that have been bought from governments with the belief that they will have ongoing consumption. There is no incentive to conserve or use less. Less use means less profits.
I think we will find that the economic rationalists that have taken over economic debate and policy have come at the worst possible time for this planet. Their, spend at all costs, approach to wealth creation. Doesn't sit well in this environment of global warming and restraint in fossil fuel usage.
Woof.


Any additional comments can be sent to mark_brickel@hotmail.com
Posted by Grump at 9:48 am No comments:

What have they done to deserve this?

What has this bank been up to, to make such a profit that it can pay it's CEO a staggering $3.5 million. I have nothing much to add to the article below except to say I think it is reprehensible and must be adding to societies costs. To say it is a private matter between employer and employee is wrong. This bank enters into numerous publicly financed contracts from which they are making excessive profits. This is the bank behind the attempted takeover of Qantas from which they had hoped to glean billions of dollars.
It stinks.
Woof.

Michael Raper, of the National Welfare Rights Network, said today Mr Moss's salary was unjustified, but conceded little could be done about it.

"It's certainly excessive, it's unjustified, it's unnecessary, and I think it's actually harmful to the overall social fabric to our whole society," Mr Raper told the Nine Network.

"But there isn't much we can do about it. It's a private company; they can do what they like.

Macquarie - sometimes dubbed the "millionaires' factory" - yesterday reported a 60 per cent lift in annual profit, a record $1.463 billion for the year ending March 31.

"How can this be worth 109 times what the prime minister gets in a year? The most responsible positions in the country - the treasurer, the PM, the head of treasury, those sorts positions - they get nowhere near this."

Any additional comments can be sent to mark_brickel@hotmail.com
Posted by Grump at 9:08 am No comments:

Hurry up with the next election

Having heard the Treasurers budget on Tuesday and the Opposition leaders response last night, I just hope they have this inevitable election sooner rather than later. Though my waters tell me it will probably be later.

The longer they leave the Opposition leader to stew in his own rhetoric the better chance the government have of retaining office. A month ago I would of not thought this, but Mr Rudd [Opposition] is proving to be a boring sort of speaker with little or no charisma. Already he is playing to an imagined television audience that likes to see hand wrenching and false smiles.

I still think he has a chance to win the next election, mainly because we are ready for a change. The old saying we don't vote knew governments in we vote old ones out. I do believe it is going to be a very boring campaign and I for one will be reading something other than political speeches. Here are a couple of funny blogs I recommend as alternative reading.

Any additional comments can be sent to mark_brickel@hotmail.com
Posted by Grump at 9:45 am No comments:

Hoooray the Qantas bid has failed to reach the 50% acceptances so for the time being it has failed. I don't think the failure is for the reasons I would like them to be. It is because the shareholders thought they could get a better price. The lesson learnt for me is that where money is concerned it's not how much you have, it is how much you can make.
I read this interesting article in The Age newspaper about wealth and happiness. It seems to be, that you are happiest, if you have enough to live but are not too wealthy you then become unhappy.
Well read the article and then reflect upon the unhappy bastards who want to buy out Qantas and other cashed up entities.
Woof.
Any additional comments can be sent to mark_brickel@hotmail.com
Posted by Grump at 4:27 pm No comments:

Those unsolicited phone calls, the pleas for money or your time, just as you are about to sit down to diner, should now be a thing of the past here in Australia. Thanks to a new service provided by the federal government.
There are one or two problems with the service as far as I can see and it is only a day old so maybe public pressure will change these.
One is that it can't be used on phone numbers that are not primary domestic use. Why should small businesses have to put up with these unsolicited phone calls any more than a domestic situation.
Two the organisations that are exempt from this registry are churches and charities and groups doing surveys. Well they seem to be the main offenders at 7pm when you are just about to sit down for dinner.
So I have registered my numbers in the vain hope I can eat my tea uninterrupted.
Woof.

Any additional comments can be sent to mark_brickel@hotmail.com
Posted by Grump at 9:32 am No comments:

I have decided I don't respect Politicians like I used to. The other day the deputy leader of opposition in Canberra was interviewed. In the interview she continued to use the same couple of mantras firstly to emphasise her point but soon it became a meaningless mantra. It no longer sounded true, original or believable. She sounded like a liar covering her tracks by saying the same thing over and over in the attempt to make it right. It may well of been right but the over use of catch phrases doesn't endear me to their cause.
This came on the back of reading an article about exactly this sort of behaviour by a politician. I had thought it was confined to politicians who were older and used this style of interviewing to avoid scrutiny. Not someone young fresh and looking to be in Government if they win the next election.
Now I realise that politicians of all persuasions are being schooled in how to handle the media to basically negate an interview and to speak in slogans, instead of having a discussion or debate.
Probably seen as good tactics by the spin doctors, it smells of a brave new world to me.

Any additional comments can be sent to mark_brickel@hotmail.com
Posted by Grump at 4:18 pm No comments: