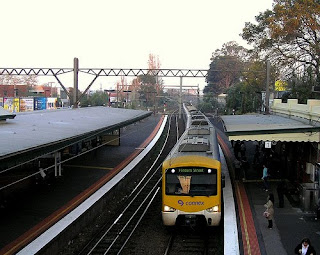 RUSH HOUR JOURNEY
Most days for the past five and half years I have walked from my home to the railway station. Sometimes it is more of a run than a walk, trying to get there in time to catch the 8.05 to the city. The distance in not far enough to warrant taking the car, and I can’t be bothered to mess around with a bike, you know what I mean having to lock it up or carry it on board a crowded carriage. Early on I realised the best way to travel is light.

As I round the first bend of my street I can see the city way off in the distance, often covered in a haze, brewing away down there in the soup, that the EPA call haze. Not that it bothers me much. Once you are in it you hardly notice the acrid edge to the air. This morning in early autumn is crisp and clear, up here in the hills. The temperature over night had just hovered above zero, the sun is bleeding through the mist, releasing a smell of leaf compost and turned earth.

I reach the station, I can hear the train as it crossed the level crossing the bells sounding like an alarm clock telling me to get myself down onto the platform. Today it is a silver train, each morning it is either a silver or green, they all have the large logo of the train company on the side, I think it looks like a couple making out on the side of a carriage, but I have been told it is a happy commuter carrying his/her bag, entering a carriage door. Are we all expected to become Metro sexual?

In reality at this time of morning, we are not happy commuters. We are trying to push passed as many unsuspecting sleepy heads to find a good seat and get settled, before the train throws you against the back of someone’s seat or worse into another passenger. Sometimes you are lucky and the seat is there in front of you saying sit, please sit I am waiting for you to drop onto me.

I step up to swipe my Lobster card, and then through the auto barrier, the last hurdle before the train. These new cards/electronic tickets are not working as they should. I stick the card into the slot it spits back at me, the barrier stays down. I try again as the next commuter is anxiously waiting for me to get through. We are all hoping to catch this train. Waiting for the next one is not an option, we have to be in the city by 8.45, push and shove will get you on board. Hanging back and waiting can mean you miss out and have to wait.

Finally the lobster works on the third attempt, I push the electronic tag back into my wallet and run with newspaper and briefcase flapping ahead of me. By running in this fashion I manage to cut a pathway to the train doors. There I notice a vacant seat just to the right of the door way, I lurch like a rugby player going for a try. The seat is mine, no arguments today, a straight touchdown.
As I wait, the carriage fills up with anxious faces searching out a seat, a safe haven for the trip ahead. No seat allocations on this route, first in best dressed. I have wondered whether we would give our hard won seats up to the less fortunate. I don’t think the thrust and lunge technique of landing a seat would have fair play written into the script.

The doors close, already the carriage is three quarters full. No seating left and there are people standing along the isle, but not yet blocking the doorways. I have scored a large man next to me. He takes up over half the seat and I am going to have to lay claim to my space. I use my true and well tried method. ‘The opening of the newspaper’. I am a broad sheet person. Can’t abide the drivel the tabloids dish up. No real interest in sensational reporting of sports players sex lives or their cooking tips.

So out comes the paper, I unfold the neatly folded sheets. They open up like an umbrella in a hotel lobby. Conspicuous and threatening. A flourish as I shake the pages open a long drawn sweep of the arms as the sheets a spread open.
Firstly you have to establish a perimeter around you. The paper creates the illusion of size. The noise of the paper being flapped also encourages your neighbour to shy away for a moment, and in that time you grab your ground and hold onto it with a firm fist. Holding with both hands, one onto the front page headlines and the other the sports pages. Once your position is established it is important to hold firm for at least 5 minutes. This can mean you might have to reread the main story twice. Because if you give ground too early you can loose any ground won.

My fellow commuters on this fine autumnal morning are a mixed lot. I enjoy giving them names and occupations. Some mornings not today, I become very black and dark and think of us all trapped in our carriage as the train derails and we have to cope with the dead and dying. That sort of day dream doesn’t surface on days like today.

Big balls sitting next to me has decided he has an itch, maybe he has worms, he is wriggling his backside around the seat. I don’t think anyone else can see it but I can feel him against my leg. Do we ever sit this close next to anyone outside of public transport? I doubt it. I suspect that big balls has decided that the wriggle backside technique can gain him some ground. He might be right and I think I have been out manoeuvred, not to worry only twenty minutes to go and I have the world news and home affairs to read. If I allow big balls to get to me I will arrive at work with a chip on my shoulder and a pain in my arse. So I am taking the Zen approach today. I look across at his pie shaped face, pale and sallow. Too many days spent inside an office on a bad diet. I can understand the wriggling now. I don’t weaken and maintain my arms length approach to newspaper reading. As I fold the pages over I look up deliberately holding his gaze for a second. I use my, ‘I’m going to win this battle of the wits smile,’ He loves it, I can tell, he holds my look, he even seems to be enjoying our seat tussle. Before I look away I glance to the window beyond him. He looks across the isle in the direction I was looking. In that moment I nudge him across half a buttock. Touchdown. He didn’t see it coming, the age old move. They say the eyes have it.
With that little battle won, I offer a parting smile, before I disappear again behind my paper.

The trees have given way to rows on rows of houses. The train snakes its way around the inner suburbs, occasionally disappearing underground through tunnels, or flying over busy roads, filled with trucks and cars, framed by tram wires and intersections. The train driver blasts his horn as he approaches crossings and stations. They are more frequent now. But we don’t stop, barely slow up. The bored drivers stare back at us from behind the barriers, envious of our unimpeded journey.

As we approach the home straight, I can see the travellers who have been standing for the whole trip, moving from one foot to the other. Rubbing their sore calves, with the toes of their shoes. Some have dozed off to sleep while standing. Their head lolling forward resting against their raised arms, hands holding vice like, to the hand grips above their heads. The carriage has found its shape and rhythm. The speed of the train has rocked us into a robotic indifference of our discomforts.
The trains intercom tells us we are approaching Swanston street station. There is a collective movement. Hands drop down to the bags on the floor. Feet begin to shuffle towards the doors. People smile to one another in a well rehearsed ritual. Time to freshen up, put on the happy face get ourselves ready to disembark.
As I glance across at big balls he is pulling himself up into the mass of humanity, that we have managed to be a subset of for the last 35 minutes. I use his large frame as a protective barrier. I want to hide behind him long enough to get a good start out of the carriage. The bull dozer who will push ahead of me. Plough his way against the tide and in his wake I will slip skilfully away and into the maelstrom of humanity that is the city.